I first started to make the sewing accessories for Carolyn Pearce’s Home Sweet Home etui set in July 2014 – that’s quite a long time ago, now! And here are all the pieces that will fit inside the house itself (which is the next thing on my list…). There are nine accessories altogether:

Don’t they look great, all collected together?

As they are not usually photographed from ’round the back’, as it were, here are the sides that you don’t usually see:

Although they have taken months to do, I am very pleased with how they have turned out, and now I want to get on with making the house-shaped box that they will fit into.

The designs are from Carolyn Pearce’s book ‘Home Sweet Home; an embroidered workbox’. It is out of print almost everywhere at the moment (2016), but is apparently being reprinted, so check Amazon and the publisher’s website for updates.

This beaded thread counter is the last accessory that I need to make as part of the set of sewing accessories that will go inside the box designed by Carolyn Pearce, and described in her book ‘Home Sweet Home: an embroidered workbox’.

It is an unusual accessory, and not one that I have come across before. I debated whether to bother making it or not, but for the sake of completeness, I thought I’d have a go, as it doesn’t take long.

It consists of two small tapestry needles, attached to fine cords, with a tassel on the end. It is used to work out the fabric count of an evenweave fabric, by inserting one needle in the fabric, and then counting the threads for an inch (which then tells you the tpi – or threads per inch). Or, if you need to count across a large gap of fabric from one area of stitching to another when you’re working from a chart, you can use the two needles to mark your place before actually starting to stitch.

I started by making a fine cord from two lengths of two strands of Anchor stranded cotton, and sliding a size 28 tapestry needle up to the centre of the length before I starting twisting it, so that the needle, when the cord was doubled back on itself, would be held at the end of the cord. Then I made a second one in the same way. These two cords were then knotted together, about 8 inches away from the needles.

I made the tassel by winding three metres of Anchor stranded cotton in the same shade as the cord around a piece of thick cardboard two inches high, and cut the threads along the bottom edge of card, giving me lots of pieces all the same length.

Then I laid the knotted cords along the cut lengths, with the knot just to the left of the centre….. 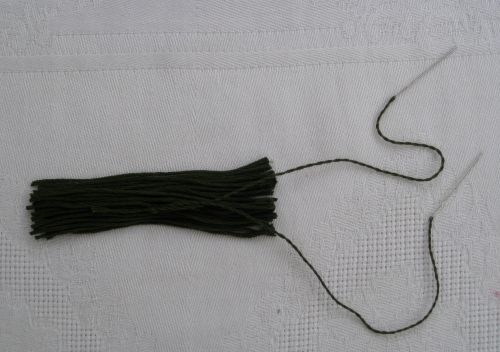 ….and tied strong quilting thread around the centre of the bundle of short lengths and the cords, just to the right of the knots, to trap them inside the tassel. 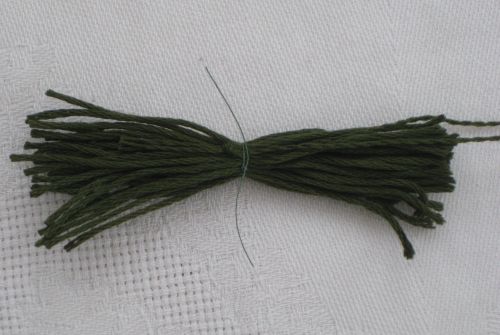 Then I folded the lengths over in the middle, enclosing the knots of the cords, spreading out the threads to make a nice round head for the tassel. I used a bag tie to hold the tassel threads down while I tied the head of the tassel with more of the quilting thread. 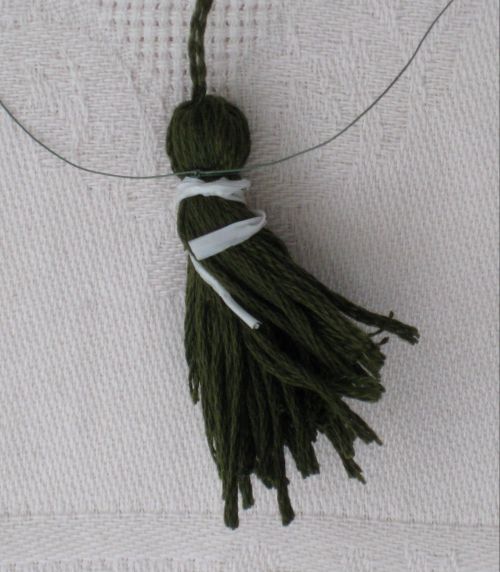 Lastly, I trimmed the ends of the tassel with large cutting out shears, to get a nice tidy end to the tassel.

In her book, Carolyn suggests that you then work detached buttonhole stitch in fine gold thread over the head of the tassel, but I couldn’t be bothered with that bit. I just wound Kreinik very fine gold braid around the neck of the tassel, sinking the ends down into the centre to hide them, and hiding the green quilting thread as I did so.

Then I threaded some beads onto both of the needles, so that they slid down to the head of the tassel. To keep them in place, after the final bead had been threaded on, I knotted the two cords tight up against the final bead. 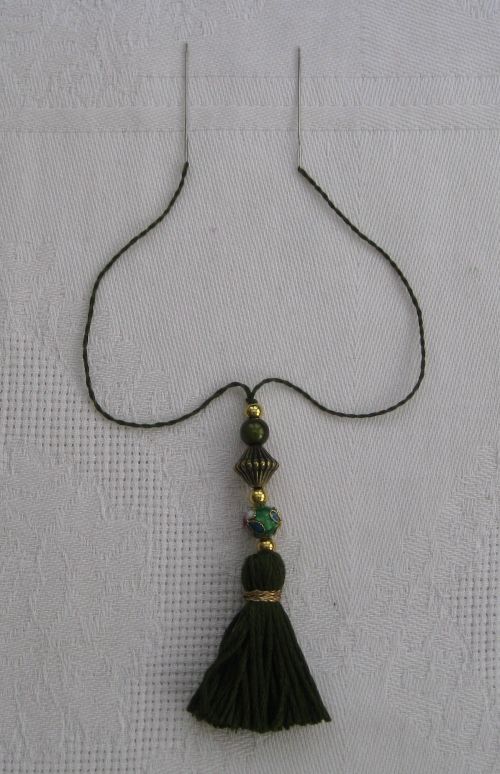 It might not end up being the most used piece of equipment in my sewing box, but I like how it’s come out. The beads finish if off nicely, I think.

This is the last part that I need to do to finish the thread-cutter cover that I am making. I had to read the instructions for this part several times in Carolyn Pearce’s book ‘Home Sweet Home: an embroidered workbox’ to get the hang of it, and it took a while before it all made sense. Maybe it was just me! But once I’d understood it, I realised it’s a very clever way of making a necklace cord without a clasp.

First, I made a twisted cord from Anchor stranded cotton, and threaded on a gold bead, a cloisonne bead and another gold bead, then took the cord down through the top of the cover, looped on the cutter itself, then threaded it back up through the hole again (be very careful not to split the cord as you come back up, as I did!), adding three more beads again. The needle and beige cotton is used to get a ‘sharp end’ to the cord, so that it will go through the small beads easily.

This is the clever bit to make the join in the cord: first, loosely make a knot in the cord on both lengths *nearest* to the cutter, but after the beads have been threaded on. Don’t pull these knots tight just yet. Put tight knots in the ends of the cord at both ends, to stop the cord from unravelling. Overlap the cord ends by about half an inch (check that the cutter cover hangs at the correct length for you before doing the next bit). With strong cotton, stitch through the overlapping cords to join them, then trim the end knots off.

Take a small piece of felt, half an inch by an inch and a quarter, and roll it tightly around the join, stitching over the overlap, and tying off each end of the felt roll to pull in the ends a bit. Make this as neat as you can.

Then, with a strong embroidery thread such as Perle 12, make long stitches from one end of the wrapped felt oval to the other, all the way round it (Carolyn suggest 14 lines, but I could only manage 9), so that the felt oval looks ‘stripey’!  Then work Detached buttonhole stitch over the whole of the felt oval, using the long threads as a base for the first round only, covering all of the felt by working the stitches closely together. I couldn’t take photos of that bit, as once I started, I realised I couldn’t put it down, or it would all unravel! When completed, the buttonholed oval looks sort of knitted.

Finally, loosen the temporary knots beyond the beads on each side, slide the beads up to the buttonholed oval, and tighten the knots again, to hold the beads in place. 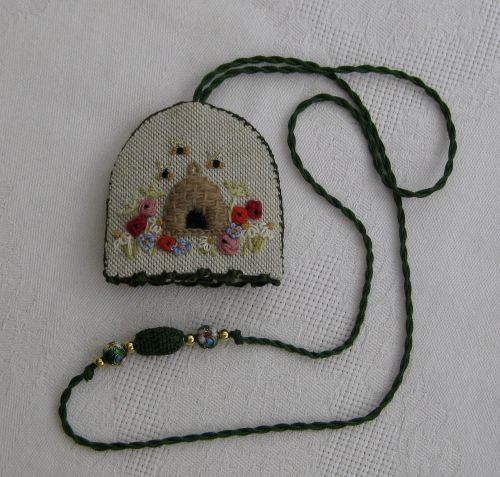 This is the finished thread-cutter cover. I’m so pleased with this!

I think it’s my favourite out of all the ‘smalls’ I’ve made so far.

It’s a useful accessory, and very pretty, too. 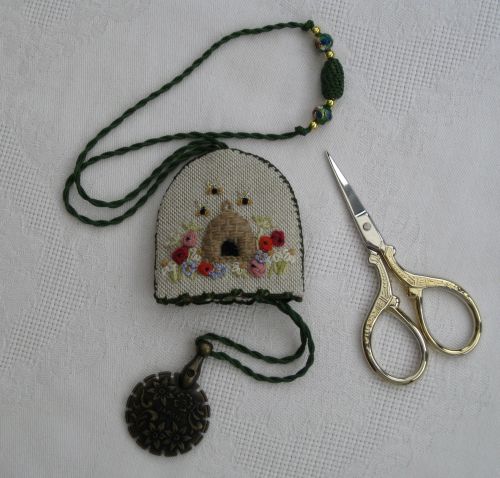 And that way of joining the cord is just so clever and neat!

The thread-cutter cover that I am making from Carolyn Pearce’s book ‘Home Sweet Home: an embroidered workbox’ is nearly finished. I’m making the decorative edging to go around the bottom edge of the cover now.

The base stitches need to be worked first. This consists of making a series of crosses of alternating long and short stitches over the edge seam around the base of the cutter cover. I made all the stitches going from left to right first….

…and then completed the crosses by going from right to left. At this point, it all looks a bit messy! 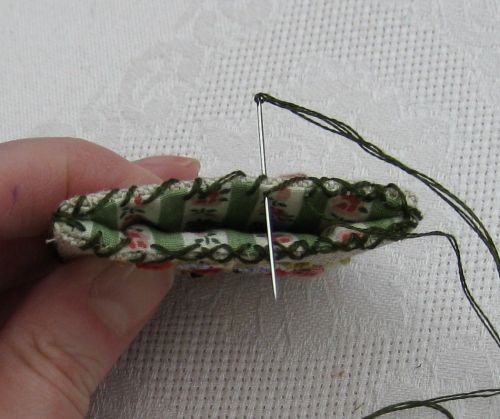 Then, using the same thread (two strands of Anchor stranded cotton 934 Dark green), I started to attach size 11 seed beads to the small crosses (using a quilting needle), and work a buttonhole loop over the long cross stitches. The more buttonhole stitches you squeeze into each loop, the better.

This shows the completed thread-cutter cover, with the beaded edge finished.

Only the hanging cord to make, now, and it’ll be done  🙂 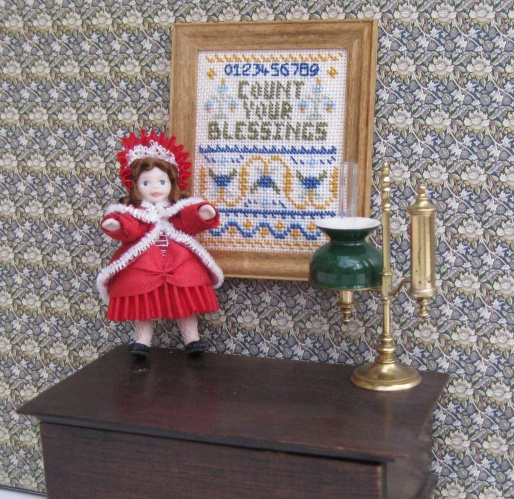 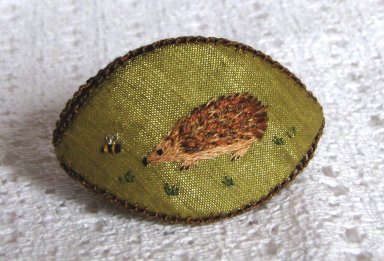 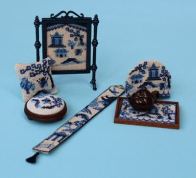 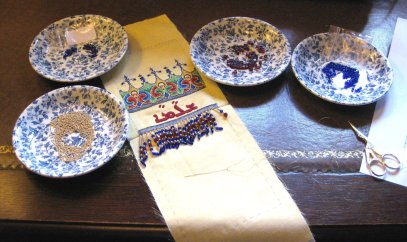 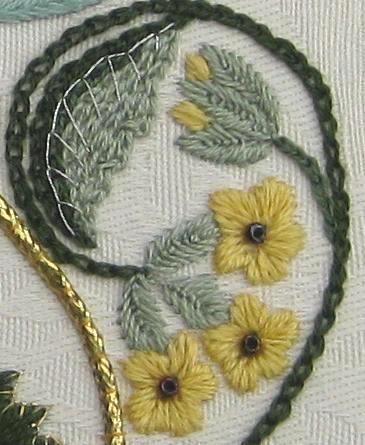 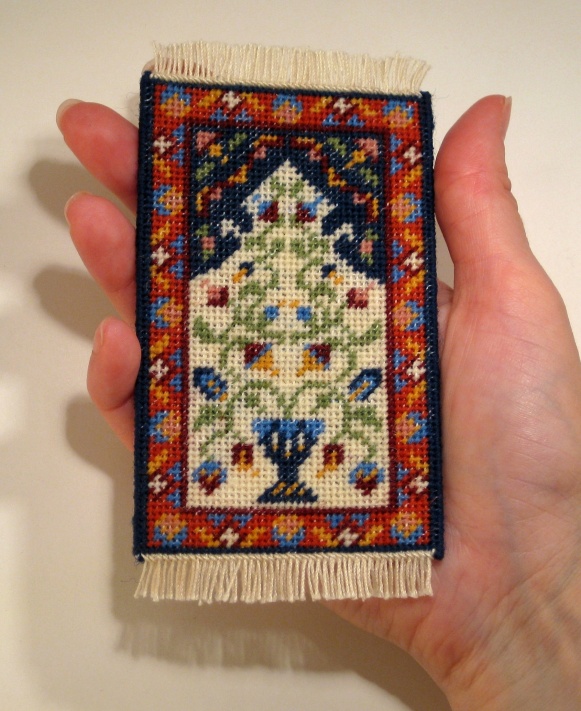 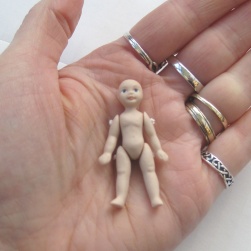 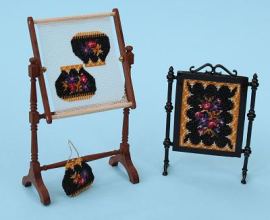 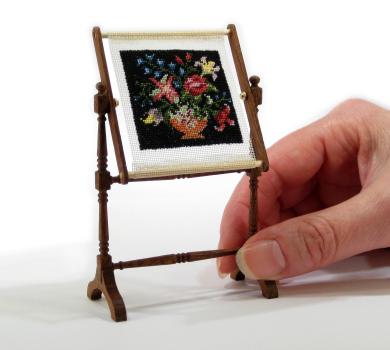 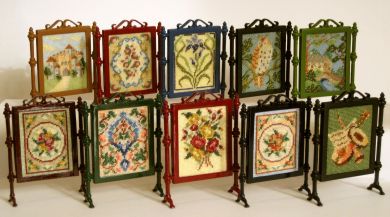 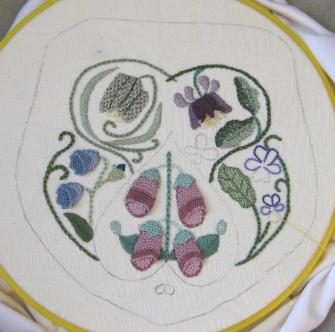 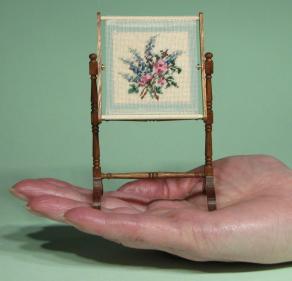 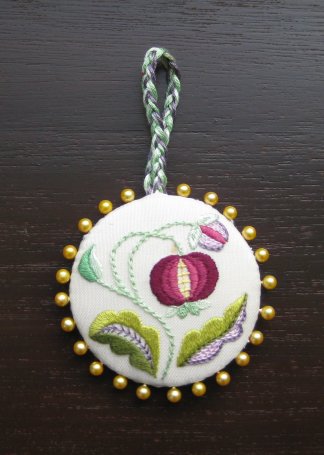